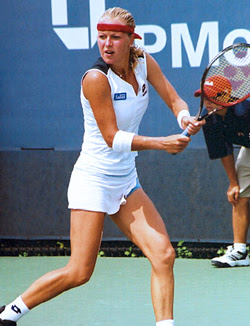 Began playing tennis at age 4 in Nove Zamky. Has 1 brother Roman, he used to travel with her on tournaments. Mother and father used to play tennis in the University. Henrieta finished with professional career in 2006, because of back injury. It was very hard for her to leave the sport she loves. In 2007/8 started to help the Slovak Federation and in april 2009 opened small tennis academy in Bratislava. Right now she works full time at her tennis academy and managing Fed cup.

HobbiesL Enjoys watching movies, listening to music and yoga. Likes fashion and often poses for photo shoots. Loves Argentina because of great people, weather, food and of course polo farms. All other information you can find on www.henrietanagyova.sk

1998 - Topped 40 match wins for first time and achieved first Top 30 year-end ranking in career-best year at Grand Slams, reaching 4r at Australian and Roland Garros; won consecutive Tour titles for first time, triumphing in Sopot and Istanbul (d. Barabanschikova 11-9 in third-set tie-break); prior to that streak, didnt lose to anyone outside of Top 10 in six of seven events (the exception being No. 75 Graf, on the comeback trail from injury)

1999 - Collected Prostejov title (d. Farina Elia in final); reached Tier I QF at Indian Wells (collecting career-best win over No. 3 Seles) and Hilton Head (d. No. 9 Coetzer) and SF at Portschach; posted other Top 20 wins over No. 16 Coetzer at Berlin and No. 12 Tauziat at New Haven

2002 - Started season with 2r loss at Sydney to No. 7 seed Testud; l. 1r of Australian Open to Frazier; due to right wrist strain, retired in 1r of Paris Indoors against Tu and pulled out of doubles w/Hrdlickova; withdrew from Doha due to wrist injury; as No.8 seed in Dubai, upset in 1r by Myskina; withdrew from Indian Wells due to right wrist injury; at Miami, l. 2r to Diaz-Oliva; beaten in Sarasota 2r by Schnyder in 3s; member of Slovak Fed Cup team that d. Switzerland in 1r; lost singles rubber in 3s to M. Casanova; as No. 6 seed in Bol, l. 2r to Garbin; reached doubles final w/Bovina, l. to Garbin/Widjaja in 3s; singles runner-up and doubles winner (w/Kostanic) at Warsaw; fourth final in her last six appearances in Warsaw and fifth final in Poland out of 12 total; retired in 2r Italian Open against Panova with a thigh strain; fell 1r at Roland Garros in 3s to Razzano; as No.8 seed in Vienna, l. 2r to Mandula; withdrew from 's-Hertogenbosch due to illness; fell 1r at Wimbledon to M. Casanova; reached second SF of the year at Palermo (l. to Diaz-Oliva); in Fed Cup play, won doubles rubber in Slovakias win over France to advance to SF; reached second final of the year in Sopot, her sixth career final in Poland; retired during final vs. qualifier Safina with left ankle sprain; returned from ankle injury at Los Angeles, l. 1r to Sugiyama; qualified for Canadian Open, d. wildcard Pierce 76(7) 67(4) 75 (most games in tournament history); retired in 2r in 3s to Henin with left adductor strain; l. 2r of US Open to Zvonareva; reached Bahia QF, l. to defending champion and No. 2 seed Seles; after 1r loss at Tokyo [Princess Cup], withdrew from Bali due to right forearm strain; ended season with consecutive 1r losses at Filderstadt, Bratislava and Luxembourg (retired vs. Pisnik with left groin strain) 2003 - As world No. 119, upset world No. 34 top-seed Tanasugarn for a spot in Pattaya City final, d. world No. 101 Kurhajcova for second title at the event (won 1997) and ninth of her career in the only unseeded WTA Tour final in